The very first mock trial exhibition in STC history took place in the SSC on November 4, 2021. It was organized by the school’s mock trial club, led by a group of Y12’s whose objective is to give students an insight into how courts and tribunals work, and relevant processes involved through simulation of real court trials. “I felt that it went pretty well in general,” said Gordon Zhang (11D2), who played the role of a witness for the prosecution. “It helped me experience what [being] a witness is like in the trial.”

The mock trial club also gave Year 9-13 students and staff the valuable opportunity to be audience members through a Google sheet sign-up on a first come first serve basis. Despite the number of audience members being limited to 20 due to COVID restrictions, the event drew huge attention within the STC community and the spaces quickly filled up.

The case presented during the mock trial was U.S. V. Dominique Stephens, a homicide involving a woman named Dominique Stephens being charged with first-degree murder for shooting and killing her husband Donovan Stephens. However, she claims she acted out of self-defense and has suffered from mental and physical abuse inflicted by her husband, and was nearly killed the last time he beat her. Members of the mock trial club simulated roles including the judge, attorneys, and witnesses, and even dressed up in costumes to portray their roles and make it seem like an official court setting.

Throughout the event, the students demonstrated excellent public speaking, critical thinking, and argumentation skills as they constructed their arguments on the spot. The event was a “really good experience” for Kayla Power (11D2) who was a witness for the defense side. “It taught me [the importance of] teamwork and I made a lot of new friends.” 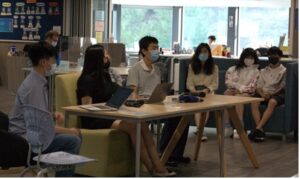