Kahlen has busy been competing in the World Junior Skating Championships in Tallin Estonia this month. As well as coping with countless travel challenges, Kahlen suffered a foot injury days before the competition. Despite this Kahlen achieved a better ranking and score than her previous best in 2020. All this, with Hong Kong’s Ice Rinks being shut for the majority of the last year. 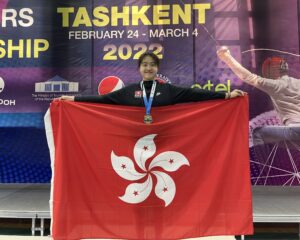 Helin has also been busy with international competitions.  Firstly at the Asian Fencing Championships in Uzbekistan, where she had great success in three categories:

After establishing herself as the best Cadet Fencer in Asia, it was time to take on the World in Dubai! Despite being two years younger than her opponents, she fenced brilliantly to reach the semi-finals and face the No.1 seed from Turkey.  This time it was not to be and Helin lost a nail-biting match by a single point, eventually finishing with a World Championship Bronze medal.

The future looks bright for these two stars and we look forward to sports opening up in Hong Kong soon and seeing our other JAG sports stars in action.