“It’s the most wonderful time of the year…” As the highly anticipated Christmas season draws near, students of Sha Tin College are demonstrating their festive spirit through their house Christmas Corridors. The Annual Christmas Corridor Competition is led by student leaders, who create dashing centerpiece displays for their respective houses. This competition is a great platform for students to showcase their creativity and artistic skills to the rest of our school.

Through the Christmas Corridor Competition, students were able to expressively share their ideas and connect with one another. While some Houses’ Corridors featured more popular and trendy characters, other houses encapsulated the whimsical nostalgia of Christmas. “During the Christmas Corridor, session time[s] passed by so fast, [and] it was really good to see younger students interact with each other”, stated Dragon’s Head of House, Mandy So (12D1). The competition brought together year groups of the same house, as they had to collaborate with each other during the making of the Corridors. Dragon’s other Head of House, Karen Lee (12D2) stated that: “During the Christmas Corridor, we had several challenges that we had to overcome”. However, the two Heads of Dragon demonstrated resilience and perseverance, alongside the other houses, thus producing breathtaking and unique corridors.

After the finishing touches had been made, students were unable to suppress gasps of amazement, admiring the quality of the Corridors and the incredible display of Christmas spirit. Ally Ho (10D2) commented that “The most memorable moment [was] when I looked at them as I walked up the stairs,” emphasizing the effort students have put into this activity. Sha Tin College highly anticipates next year’s Christmas Corridors! 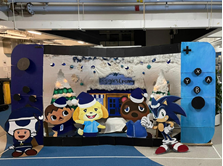 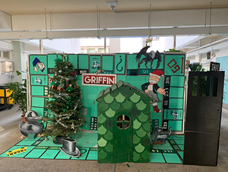 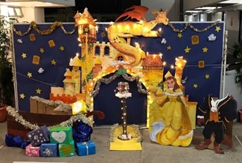 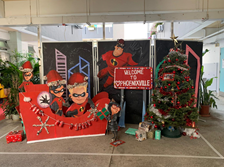